Yesterday in Washington D.C., in photos

If you plan to visit Washington D.C. this week, don't forget your umbrella.

I didn't have one for the first hour or so walking around outside downtown yesterday morning, and I was quite wet. Thankfully a nice man approached me outside the National Archives with several he had on sale for $5. It was going to be a long day without that.

It turned out to be a long day, even with the umbrella, but I had a good time seeing the sights. The National Archives is a stop I recommend to anyone visiting here. The actual Constitution of the United States is on display inside that building. I was fascinated with all those historical documents. Two uniformed guards stand on either side of the Constitution in a dimly lit room (presumably to keep the documents from fading or discoloring over time). There's no photo here because photography inside the building is prohibited.

I've often disagreed with people over the years who say the U.S. Constitution is God-inspired or that the writers penned those words under the unction of a higher power, but there is undoubtedly something special and unique about that document. I really enjoyed that museum.

Here are some photos from today: 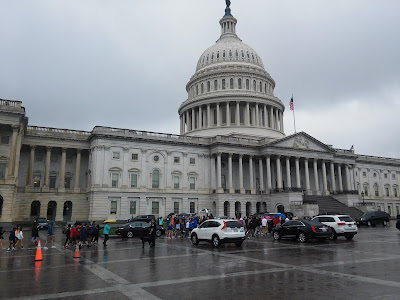 A really cool-looking building, but you have to stand in line behind what looks like a thousand school kids to get inside (in the rain). I decided to take a look at the exterior of the building and and walk to some of the other sites. Who knows, I may get another chance to go inside sometime in the future. 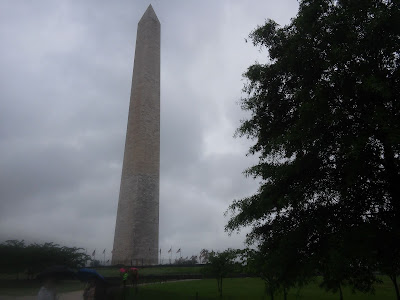 The Washington Monument is tall, but not quite as tall as the San Jacinto Monument in Deer Park, the birthplace of Texas. Unfortunately, this monument is under construction and I was unable to go inside and take an exciting ride in a glass elevator (like Charlie and the Chocolate Factory). They need to fix this place because looking out from those windows on top would be fantastic. Just imagine how much you could see from up there! 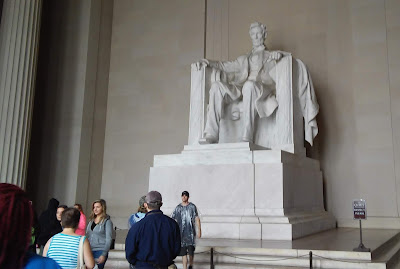 The Lincoln Memorial is spectacular, and many people were there wanting to see him seated on that big chair. He did such a good job freeing the slaves and being an all-around fantastic president. Incidentally, the National Archives has the Emancipation Proclamation persevered there for you to view, hand-written by President Lincoln. 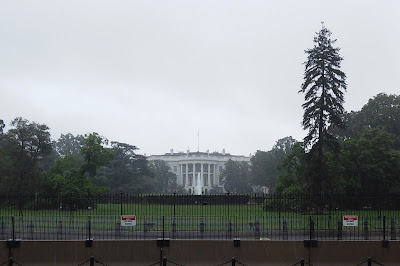 By the time I made it to the White House in the afternoon, I had walked many miles and was very wet. However, seeing the place in person after years of views on the television and books is quite awe-inspiring. 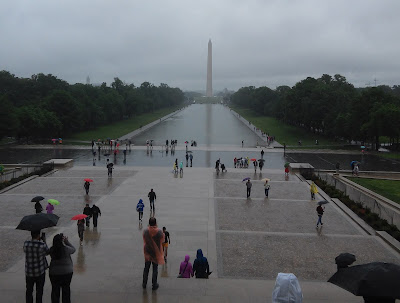 Two women stopped me by the monument and asked if I knew where the scene in Forrest Gump had been filmed. At first I didn't know what they were talking about, but I do seem to remember Forrest Gump standing here at one point. I stood here long enough to shoot this photo before venturing out to find the Jefferson and M.L.K. memorials, which I saw on a sign but never actually located during my walk. 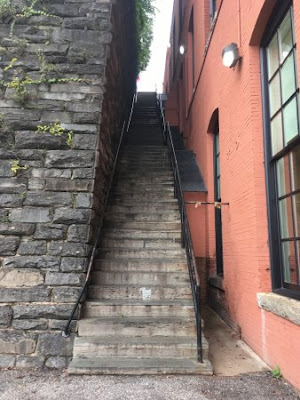 I had planned on visiting this site on Friday (today), but because my phone battery died I didn't have GPS and was driving out of downtown Washington looking for a freeway sign. I ended up in Georgetown by accident, and pulled into an Exxon gas station to ask for directions. I looked up and there they were! I didn't have battery power to take a photo, so I'm borrowing someone else's picture. These iconic steps from The Exorcist actually end on M Street, practically in a gas station parking lot. Best spooky movie of all time? Quite possibly.

Tonight I'll visit Nationals Park to see the Dodgers and Nationals play for Baseball Night in America. If you are wondering whether Baseball America in America really exists, it does really exist. I saw it on my Twitter page.

Posted by John Tyler at 7:42 AM No comments:

I'm looking forward to jumping on some airplanes early tomorrow that will take me from Houston Hobby to Love Field and then on to Reagan National for several days of fun in our nation's capitol.

There I'll see the sights, immerse myself in the history of this great nation, and shack up for several days near Andrews Air Force Base. I always enjoy hanging out in the vicinity of our nation's warriors.

The World Famous Los Angeles Dodgers take on the Washington Nationals Friday Night. I'll park my rear in the outfield for Baseball Night in America. Frank in La Puente, or "Big Bad Frank" as I affectionately like to call him, shipped me a brand new shirt for the event. I think I deposited nearly $11 in his Paypal account for that gorgeous shirt. A fantastic product shipped very fast. Thank you.

I haven't visited Washington D.C. since the early 2000s when I attended some meetings at the Smithsonian commemorating the completion of the human genome. I got around town a little bit back then, but this time I've made a list of places I'd enjoying seeing while in Washington.

Here's where you might have a chance to say "hello" between now and Saturday (other than the ballpark):

1) The White House - This is where President Donald Trump and his wife currently live. When I visited last time, there was a construction project underway that prohibited walking up to the fence line. I'll take a better look this time.

2) The Capitol Building - I have cable news on frequently during the day and there seem to be numerous important people who do interviews in that building, sometimes saying some pretty interesting things. I've also noticed statues that would probably be cool to take a look at if time permits. I'd love to walk into the room where the president gives the State of the Union address, but that looks like the sort of place that might only be open to visitors at specific times.

3) The National Mall - I took a long walk and saw all of that during my last visit, but it's definitely worth another lap around the pool. The statue of President Lincoln sitting on that huge chair is spectacular. I may wander over to see the new (or relatively new) M.L.K monument. That sure was nice of our nation's leaders to give him his own statue and memorial in D.C., but I would have voted to put a smile on his face. He doesn't look very happy.

7) The concrete steps in Georgetown that Father Karras tumbles down at the end of The Exorcist, and the house the MacNeil's rented at 3600 Prospect. One of my favorite scary movies of all time, and one of the most iconic and memorable shooting locations in film history.

For the life of me, I can't remember the name of the place I saw President Obama and Vice President Biden have lunch near the White House years ago on the news. I made a mental note to eat at that location during a visit in the future, as they said the restaurant is a prominent fixture in the White House area. I may have to grab my Big, Fat Everything Burger somewhere else in the city, because I neglected to write down the name of the place and nothing I see online rings a bell. However, I imagine there are plenty of places to grab some tasty chow in that town.

Maybe I'll just bring a Papa John's pizza back to my swanky room and enjoy it with some of that garlic sauce. On second though, I really don't care for that garlic sauce much. Possibly a Big, Fat Everything Pizza without the garlic sauce will do just fine if I can't find the burger place.

I hope to see y'all around town.