I’m not completely sure what this means (see photo below), but from what I gather, it basically indicates the stars are aligned for someone wanting to get pregnant. 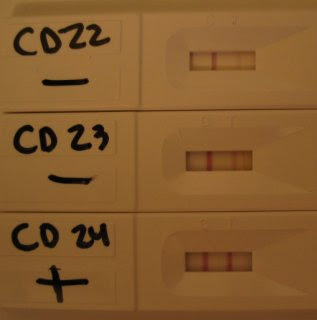 Welcome to my world recently, as I’ve been immersed in ovulation predictor kits and fertility message boards. My sister wants a second child. I spent a few days over at her place with her, her husband, and my niece.

My sister is really hoping to get pregnant again. She has a darling 18-month-old daughter, and she’d love to have a little brother or sister for her.

The photo above is an ovulation predictor kit, which requires urinating in a cup and then applying several drops on this piece of plastic to see if the time is right. I’m sure it’s a bit more complicated than that, but that’s my level of understanding.

However, her doctor tells her that she has premature ovarian failure which renders her ability to have children “highly unlikely.”

We had a good time discussing what led up to her becoming pregnant the first time. There’s no better way to stir up your faith than to remember what God did for you in the past. David wrote: "I will remember your miracles of long ago. I will meditate on all your works and consider all your mighty deeds" (Psalm 77:11,12).

This is a cool story.

Roughly two and a half years ago, my sister and brother-in-law had recently accepted Christ and were attending church with me. They were also trying to get pregnant, and had been trying for several months to no avail. I kept encouraging my sister that God would bring this dream to pass if she just maintained her faith and stood on His word. However, I could tell from time to time she was really struggling with the idea that she had waited a little longer in life to get married and feared she wouldn’t be able to get pregnant.

I can remember us congregating in restaurant parking lots after having lunch and praying God would give her a baby. She mentioned it almost every time I saw her. I saw her crying about it on at least one occasion. Then, one Sunday I attended another church to see someone get baptized. My sister gave me a call on my cell phone after she left Lakewood.

She told that a stranger had walked up to her and her husband, out of the blue before the service, and said, “God says he’s going to give you a blessed child.”

They were both new Christians, and not familiar with the gifts of the Spirit. I later had them point this person out to me in a service, and we had no idea who this man was at the time. He had just stepped out in faith and spoke into their lives. Praise God for people like that! He had absolutely no way of knowing that was their area of struggle at that time. We’re talking about a complete stranger walking up to two people in a room with about 7,000 other seats and hitting the nail right on the head. Wow.

Several months later, however, she still wasn’t pregnant. One Saturday night service, Ms. Dodie asked everyone present who was trying to get pregnant to stand up for prayer. Dodie prayed the prayer of faith and within days my sister called me, exclaiming that she had a positive pregnancy test. I was floored, but not half as much as my sister was.

Coincidence? I’ll let you make the call. I choose to bless the Lord for stuff like that!

So here she is today, believing for a second baby. You know, if He did it for you once…

On another note, I’m looking for a new job, as many of you are aware. I’ve sort of left the door open as to where I’ll go (geographically). I’m simply believing that God will open the right door in the right place, and I look forward to walking through that open door when it opens.

Is this Texas boy destined to leave Texas? I’ll keep you all posted as to these developments.

Oh, and I got a letter in the mail to report for jury duty. I’m excited. Some people groan about jury duty. I love it.

I’ve only had the honor of getting seated on a jury once, and it was something else. The other jurors selected me as the foreman for some reason.

It was a competency trial to see if this man was able to go on to face another trial for a crime we weren’t told about (we were instructed not to worry about what he had or hadn’t done, that was for another jury to determine if we found him competent to stand trial).

It turned out that this guy claimed he was being told by the spirit of a dead rabbit, Mr. Cadbury, to do bad things. I’m not making this up. This dead rabbit even hopped around in the courtroom at one point during the trial (or so it seemed, the defendant appeared to be following something around the floor of the room with his eyes that I couldn’t see).

Anyway, after an examining psychiatrist claimed under oath that the defendant, in his opinion, could determine right from wrong, we had to find him competent and send him and Mr. Cadbury on to another trial for their crime.

Chances are that this stint of jury duty won’t be as exciting but I’ll sure report back if I’m wrong.
Posted by John Tyler at 11:58 AM No comments: