Merry Christmas!
Posted by John Tyler at 7:42 AM No comments:

Andy to Yankees, Vince comes back to play Texans

Take care, Andy. We'll miss you. God bless you, brother, and best wishes for you, your family and the Yankees.

Since draft day last year, there has been one particular football game highlighted in my mind. This next one at Reliant is the one I'm referring to. No, the Texans-Titans game probably won't have much of a impact outside the two towns represented, and in the scheme of things it doesn't really matter more than any other regular season game. But I bet Vince Young has been thinking about this one. I saw a Vince Young special on BET a couple weeks ago and he was playing softball (presumably in Tennessee) wearing an Oilers cap. Oh yeah, he's thinking about it. And many of the Texans fans have been thinking about it, too.

Not to mention, all the former Oilers fans.

Vince Young gets to come home and show us all he should have been added to the Texans roster. On the other hand, the Texans get to show everyone that they can handle things fine without him.

Does Vince have something to prove to his hometown fans? Probably not. Most football fans here already know what he's capable of doing. Question is: Will he do it big this weekend at Reliant Stadium, as a member of the former Houston Oilers...after we passed him up in the draft? I certainly don't want to encourage him against the Texans, but it's not going to be pretty around here if he goes crazy and does something like passing for two or three touchdowns and rushing for another one -- and the Titans come out on top.

Am I going out on a limb to say this would be a very, very nice win for the Texans? This game is going to be fun to watch.
Posted by John Tyler at 11:35 PM No comments:

I was in a grocery store this morning in Deer Park, Texas wearing an Astros T-shirt. As I waited in line behind several people to check out, the sacker called out to me, "Do you think (Andy) Pettitte is going to New York?"

For those of you who don't know, Deer Park is Andy's hometown. He's a graduate of Deer Park High School and a local hero. Sports Illustrated's Web site reported today that he might be considering an offer from the Yankees for next season.

Not knowing all the details of the situation (and really not feeling qualified to speculate on the comings and goings of Andy Pettitte), I said, "I don't know what he's going to do, but if someone offered me $26 million to throw a baseball in New York City for a couple years I'd be on the first plane out."

My comment was greeted with smiles and nods, but I think everyone hopes Andy plays another season of baseball and plays it with the Astros. I would think the Astros need him (and Clemens as well) if they are hoping for big things next year.

I understand after checking Chron.com tonight that Andy says he will play again next year, somewhere. Keep your fingers crossed, Astros fans. 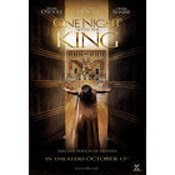 I heard the Trinity Broadcasting Network (TBN)announce this week that it will air One Night With The King on New Year's Eve and New Year's Day. Make sure to catch this one if you haven't seen it already. It's awesome.

There is a new term I coined while watching this movie that may appear from time to time on this blog, and I wanted to share a definition in case you ever encounter it here:

I'll tell you what, I loved it when those feet were pounding on the wet ground and she burst into the room to face the king. I was sitting close to some strangers so I made sure to keep my composure. :)

I reread the Book of Esther in the days before checking out this film. It's a wonderful story that is rich in meaning on many different levels.

Our Jewish friends celebrate this story every year, but as Christians, I think it also has amazing significance to our walk with Jesus. Since most of what we see in the Old Testament is a "shadow" of what came in the New Testament, we can clearly see the story of the cross in what happened in Esther's life.

After all, isn't Esther's overnight rise to royalty what in essence happens to everyone who meets our savior?

The beauty is, this film has something for everyone, regardless of religious affiliation. I love what film critic Michael Medved had to say about the movie from a Jewish perspective (click here to see his interview).

It's also a story of destiny. An amazing yarn illustrating what courage and the touch of God can do in someone's life.

You know me, I had "Princess thoughts" pretty much from start to finish during this one. It is, after all, about a princess. In fact, Esther went to princess school.

While I watched this film, I remembered a year or so ago when I was looking at the first couple chapters of Esther with a small group of believers. A female in the group took issue with some of the king's actions, including how Esther was selected. She was convinced that just because this king chose his wife a certain way (basically a beauty pageant), it didn't necessarily mean God approved.

Obviously we're dealing with kings and queens and all the protocol involved with that type of life, so whether God approved of selecting wives and queens that way, who knows?

But how can you argue with what Esther pulled off once selected?

If you put this story in a modern timeframe, it wouldn't work. Can you imagine your husband having too much to drink one night and ordering you to march around in front of his friends and underlings just to show off how hot you are? (Esther 1:10-15).

How about if he decided to break it off with you because you didn't feel like doing it, sent letters to your entire city telling of your "disrespect," and then spent one year giving beauty treatments to other females to select your replacement? (Esther 1:19-22 and 2:2-4)

If a world leader did that today, Dateline NBC would be on the phone to the press department before Queen Vashti could gather her stuff.

I guess that is just how things were done those days in that part of the world. No matter, we get to meet Queen Esther! And we find out that King Xerxes is truly a good person who definitely cares for his princess. It turns out he doesn't even really like the process of picking his queen.

And along comes Esther reading a love story to him.