The Lakers just aren't that entertaining 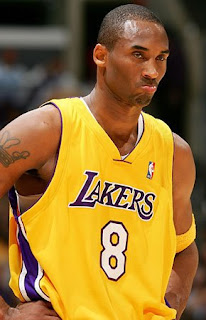 I can't remember which of the L.A. Times sports writers said it, but they hit the nail right on the head. The problem with the Los Angeles Lakers is that they just aren't that entertaining.

The Rockets bleed. The Rockets have to be escorted off the court with a knee injury and then talk the trainers into letting them back in the game. The Rockets shave stuff on the side of their head.

The Lakers...I'm not sure what they do. Watching the Lakers play basketball right now is like trying to force yourself to read a really bad book. You can do it, but you've got to really concentrate or you're mind will drift to other things.

Sure, Kobe is going to show up and be Kobe at some point. That's a given. But will that be enough to overcome the most obvious problem facing the Lakers? The NBA's Hollywood team is boring, and the Houston Rockets are exciting to watch.

What do you want to see in the Western Conference Finals? The yawning festival they call the Los Angeles Lakers, or the best and most interesting basketball team on the planet, the Houston Rockets? I think the question answers itself.

And did you know Yao Ming is from China?

The L.A. crowd can be a tough crowd, I would assume. They know what it's like to be entertained. How will they react when their basketball team keeps falling short, not only losing, but doing so in a boring fashion that even has Jack Nicholson sitting on the sidelines with his arms crossed much of the game?