Overwhelmed by Princess thoughts at the movies 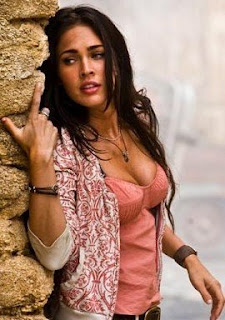 Megan Fox clad in a white dress holding a bouquet of flowers during the first 20 minutes of a movie makes almost everything else in a film irrelevant for me.

There are robots, and explosions, and soldiers firing loud, powerful weapons in Transformers 2: Revenge of the Fallen, but it's all filler once I've had to look at that. The course for this film was set when Ms. Fox tried to get her boyfriend to utter the words "I love you" to her in that get-up in it's opening minutes.

The rest of the film is really about distractions. Killer robots causing hate and discontent, other hot chics that at times compete for his attention, and a seemingly unending barrage of explosions, chase scenes and every other type of cinematic thrill you can imagine.

Michael Bay spent a lot of money to keep everyone entertained. And I was entertained. But in the back of my mind the entire time was whether or not this guy was finally going to tell her he loved her, and enter into marital bliss.

For me, this movie was about Megan Fox's character. Let's put aside her physical beauty for a moment, because that really isn't what I'm referring to.

What I liked about this character was not only the dedication she showed to a man she obviously loved, but this constant battle she has with him to get him to admit to feelings we suspect he already has. He makes some bad decisions, like being at some kind of wild dance shindig with other chics while the drop-dead gorgeous woman that loves him is sitting in front of a webcam waiting for him. That didn't make any sense at all.

Then he somehow finds himself in a compromising situation with another female, at the precise moment Ms. Fox walks in his dorm room for a surprise visit. They break up temporarily and get back together, but you sense for most of the film this guy doesn't realize what he has. Have you ever wanted to yell at a movie screen: Dude, that woman is in love with you! What are you doing?

I'm praying for a Princess like this character. She's princessy. She's strong, she's lovely, and seems unwavering in a singular dedication to her man. Friends, this is the type of woman that knows what she wants. A fabulous Princess.

Did I just describe you? You could be my Princess. Please continue reading this blog.

By the way, the film does have a happy ending. If you haven't seen it yet, I do recommend this one. Yes, I guess it's about robots. But it's about love. And the only thing more important than robots and explosions is love.

Wherever you are today -- I love you, Princess.
Posted by John Tyler at 4:31 AM No comments: