Another deer-in-the-headlight photo from Washington D.C. 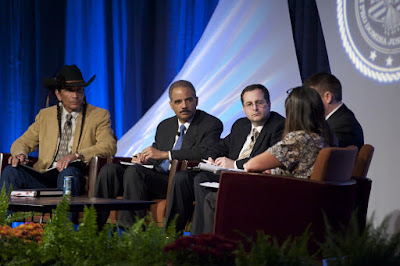 So, we're sure these two guys have a handle on the situation?

If I was giving advice to federal government Web teams, I would suggest that putting up with the press is difficult enough without making things more difficult on yourselves.

Before posting a photo to a government Web site, I might recommend asking a series of questions to a colleague, or maybe even several colleagues:

* What does this photo communicate to you? Does it send a message that is confusing, or illustrate a point you're not ready to discuss at this time?

* Does the photo communicate competence? These are admittedly difficult times, with unprecedented challenges. Are we contributing to the problem or alleviating the problem if we use this photo.

* Can this photo be interpreted as a threat? If so, will the person(s) we are trying to communicate with understand the message? How will that message be interpreted by everyone else that is not being threatened? In general, threatening assholes is a bad idea unless you're just about ready to take action.

* Ask someone to quickly say the first words that come to mind when they see the photo. Do you hear words like "strength" "reliability," and "confidence," or is the response "Holy shit" or "What the fuck?" This could be a great test as to whether or not a photo belongs on a U.S. government Web site.

I know this is none of my business, but those are my thoughts.

What do you all think about Eric Holder as AG? I still haven't made up my mind completely. I have a nickname for him, that he may or may not deserve. I call him "Mr. Shit-Eating Grin." I guess I've seen him grinning at times I wish he wasn't. He better have information he's not sharing at this time.

The guy sitting next to him in this photo has a puzzling look on his face that I sure hope makes sense to someone.
Posted by John Tyler at 4:38 PM