This Jerry Eversole case is more exciting than an episode of Law and Order! 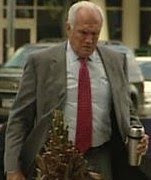 If you're reading the blog outside of Houston, you may not be aware that we've got an absolutely spellbinding criminal case going here right now.

Jerry Eversole, a Harris County commissioner, is accused of bribery for $100,000 in gifts he received over several years from a local businessman that received county contracts.

The first trial ended in a mistrial today (jury deadlocked), but a new trial will start soon.

The government says the long list of monetary benefits (dinners, gifts, trips, yard work at his home, etc.) was really a way to obtain votes for county contracts, and not simply friendly gestures as Eversole contends.

I'm not making a judgment one way or another about his guilt or innocence on the blog, since I'm not in the courtroom to hear all the evidence (I wish I was). However, some of the gifts (like more than $10,000 in landscaping at his home), seem to be a little difficult to explain away. How many of your friends have ever spent thousands of dollars on your home?

They must be really good friends.

One of the other things I love to watch is Eversole going into the court each day. Ted Oberg, reporter with ABC 13, approaches him with a microphone as he walks in.

Eversole says he's like that guy in baseball with two outs and two men on in the ninth inning, while appearing to point at his crotch. Maybe he wasn't pointing at his crotch, but that's what it looked like. He feels great!

Rusty Hardin, or as I like to call him, Mr. Smiley, is always so happy and confident. Hardin is Eversole's defense attorney. I like Rusty Hardin.

"It's hard to convict a guy who's not guilty," says Hardin, grinning ear to ear.

You can see where the major problem would be for me, if I was a juror. I don't know how you explain that away, but apparently Eversole's explanation worked for at least some of the jurors.

I just checked the mail, and there is no jury summons, so I'll just have to count on Ted's reporting for every exciting development in the case.
Posted by John Tyler at 2:11 PM