The Houston Astros: An organization of pussies and pieces of shit 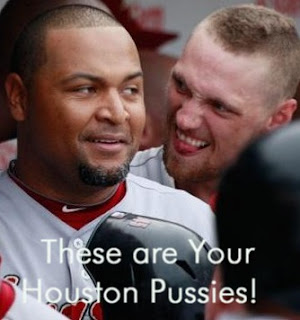 From top to bottom, the place is in shambles. The worst organization in professional sports, without question.

They like to fuck with me, don't they? They can dish it out, but can they take it? That's what we're about to find out.

J.D., the guy who sits there talking shit every fucking game on TV, needs a fucking fist in his mouth. I volunteer mine. Volunteering is great!

Wandy, the pussy, could use the same.

That bald-headed piece of shit that manages them. He's full of shit. Consistently.

Hunter Pence. I wouldn't even hook you up with a fucking stripper, asshole. You ain't fucking any girlfriend of mine. You think you did, or you're gonna? That ain't my fucking girlfriend, shithead. Go pick up some hotcakes from mamma and shut the fuck up.

You think I'm going to work there? I can promise you something. The day I start work in an organization like that a flatbed truck with cardboard boxes is showing up right after I do my first morning. And they'll get used.

The problem is, these overpaid morons have been led to believe they're special. They are one bad decision away from coaching junior high gym class, and someone as braindead as Ed Wade happened to think they had a clever name or something. That's the only excuse for why some of you ever wore the uniform of a professional ballclub.

Nothing will give you a renewed appreciation for school teachers and firemen quicker than watching nine innings of Astros baseball (and that abomination of a post-game show). What the fuck was Jim Crane thinking to spend that much money on a sinking ship?

I want to believe Drayton is an exception to all this, but a wise man once told me, "John, unfortunately a fish rots from the head down."

Go fuck yourselves. And if you have any problems with anything I've said here, just name the place and the time. You better have a buddy there to help pick your teeth up off the concrete, because I don't really like you people much and I'm tired of your bullshit. I've bit my tongue long enough.

I'll be back out there at Minute Maid Park eventually, wearing Dodger blue again, arm-in-arm with my gorgeous Princess (which none of you morons are going to fuck...she'll have standards).

And don't worry, football season comes soon enough around here. I'm sure I'll have thoughts at that time as well.

Best of luck everybody.

Added later: I should have mentioned: Bud Norris...what a fucking douche bag.
Posted by John Tyler at 7:49 PM No comments: