Photo emerges of 'Hollywood Tyler' with the Huntington Beach Rams 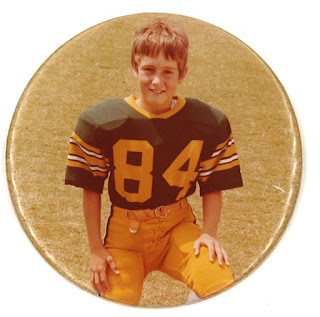 I scanned this photo from a button my mom used to wear to my football games when we lived in Huntington Beach, California. I found this in a box and it brought back many memories.

Those were the days of "Hollywood Tyler", a nickname my coaches (one of which was my stepdad) gave me after a stunt I pulled on the football field while playing tight end for the Huntington Beach Rams.

My team had just scored a touchdown. As they celebrated at the goal line, I sprinted by myself from the endzone to somewhere near the 50 yard line, where I attempted my very best somersault for the crowd.

My coaches quickly called me to the sidelines where I was informed I wouldn't be doing that again. However, the stunt did earn this mediocre pee-wee football player a pretty cool nickname on the sidelines, so I always felt it was worth my effort.

We only lived there for about a year, but I had a great time. My first trip to Dodger Stadium was during that period, where I saw the Dodgers play the Astros. Our next door neighbor (and my girlfirend's dad) agreed to buy me a ice cream sundae because I correctly predicted an Astros win that afternoon.

Huntington Beach was also where I met my first girlfriend as a third grader. I'd pick roses from a neighbor's yard as I'd walk home from school, bringing them to her house in my lunchbox. Her family had a small shed in the backyard we would occasionally hang out in. I remember her mom saying to us as we walked out the backdoor one evening, "I better not catch you two out there playing doctor."

Not knowing what that meant, I asked my girlfriend if she felt sick. She didn't feel sick, so we never did play doctor.

I remember really liking her a lot, and that was my first memory of having my heart broken when we moved back to Texas.

I look forward to getting back out there to see the old neighborhood at some point.
Posted by John Tyler at 3:23 PM No comments: 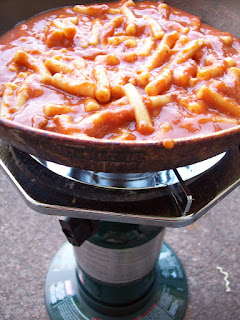 The purchase of a new Coleman propane stove has quickly expanded my available menu here at Camp Victory.

Today I used a Swiss army knife to break open a can of Kroger brand Macaroni and Beef in Tomato Sauce. Such an elegant flavor. I'm definitely going to pick up more cans of that stuff next time I visit the store.

Tonight I might even try a can of ravioli. They're on special for about 70 cents with a Kroger card.

This has been quite a step up from a diet that has consisted heavily of canned tuna and peanut butter sandwiches. I'm still eating plenty of those, but thanks to the new stove I can occasionally eat foods that require heating. 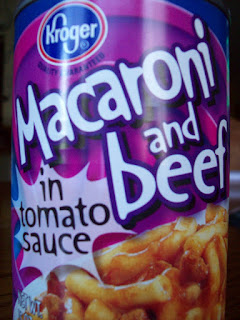 The skies have been much quieter since I posted last time. I heard one of the black helo war birds flying overhead either the night I published the last post, or maybe the next night. Since that time I haven't heard another.

I can't determine who is flying these things, or what they are trying to accomplish. Are they a foreign force wanting to take over America, a U.S. military unit that doesn't realize they shouldn't be wasting so much gas, or maybe an Army of angels taking Whitney Houston to Heaven?

I can't figure any of that out, and I've decided it's wise not to waste too much time or effort trying to figure out shit that doesn't make sense. Maybe they just like flying around.

However, I think there's plenty of room in the backyard to land one of those things if y'all want to come in and discuss what the fuck has been going on. I'll publish photos here on the blog of your landing and details of our discussion. And everyone secretly wants to be on this blog! 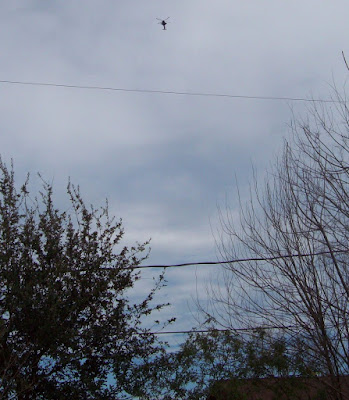 Posted by John Tyler at 5:05 PM No comments:

I think the black helicopters overhead are friendly. They haven't fired on anyone yet. 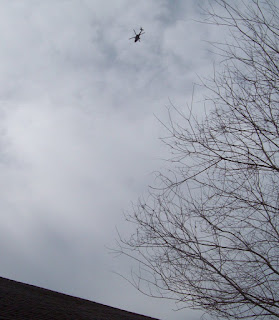 The black helicopters over Deer Park, Texas, were quite active this weekend. These two photos were taken today (Sunday) from the backyard in the College Park subdivision.

The second photo is a direct flyover (the camera is pointing straight up). They were up on Saturday as well, but I couldn't get my camera turned on and out the door fast enough to shoot pictures.

I've seen them flying mostly after dark recently, so they are hard to photograph. It's actually a bit more exciting when there are several of them at the same time.

They haven't fired on me yet (or anyone else for as much as I can tell), so they're probably just keeping an eye on the neighborhood for terrorists or assholes. I want to see them open fire on one of those small airplanes! Well, maybe not over the neighborhood itself, but how about following one of them to the Laporte area? There's a lot of open space in that area around Underwood.

Relax. I'm kidding. But I've really enjoyed watching the skies. Last week sometime I heard the sound of a plane descending quickly in the area (sounded like it was coming down!), and I ran out the back door just in time to see the thing pulling up and away. It looked like a private jet or a small passenger plane, but I can't be completely sure.

I hope someone is taping all this stuff for the feature film. 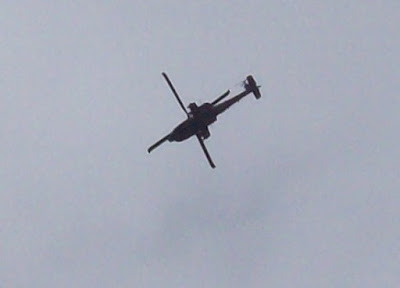 Posted by John Tyler at 6:40 PM No comments:

Hanging out at my Clear Lake office today, and a Princess search update 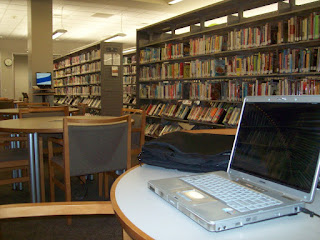 I thought I'd take a few minutes to catch you all up, because when you don't hear from me for several days you seem to get concerned.

I don't get paid to blog, nor is there much to report right now, so I basically blog when I feel like blogging. It really is a great arrangement.

I'm working out of one of my offices right now, which is the Clear Lake branch of the Harris County Public Library. I also office out of the Deer Park Public Library several hours a week. Here's a photo of my Clear Lake office.

I showed that photo to my dad, and he said, "Looks like you're a lawyer." If I was a lawyer, I'd have a commercial on TV that says, "Somewhere in all these old, dusty law books we lost a very important concept. The law is for everyone, not just rich and powerful dickheads trying to get away with a bunch of crazy shit."

Well, maybe I wouldn't use those exact words, but you get my drift. Can you imagine the personal satisfaction of going to work each day to fight against maggots and bullies? I might have missed my calling.

You're probably wondering how the job search is going. I interviewed with an oil and gas company here in Houston recently, but I don't think I was a very good fit for the team. The two guys I spoke with were nice, and I sincerely appreciate their time, but this was a different kind of writing than I've done in the past and maybe wasn't the best match for me. I need to continue winning, and I have to trust other people's judgment as to where I'll continue to win as fantastically as I have in the past.

I also applied to a couple government jobs recently outside of Houston (one in San Antonio and another in Indianapolis). I'm definately qualified, and I supposedly get special consideration because I'm a veteran. If those two places determine I'm not a good fit for the team, I'll probably determine I'm not a good fit for anyone's team, and I'll have to jump off a cliff.

I'm not dating right now, so the Princess prognosticators (people that try to guess who my Princess is) probably shouldn't be pairing me up with anyone. If you're new to the blog, you might not have discovered yet that any single female that I'm in a room with for any length of time becomes my Princess.

If I go to a new bar, or a public library, and there are single females in the room, people think I'm trying to pair up. Have you ever considered that maybe I'm just looking for a place to plug my laptop in?

The best advice I can give to Princess prognosticators, as I've said in the past, is wait until I'm actually dating before you pretend you know who I'm thinking about. That's better for me, but most importantly that's better for the females around me. They don't deserve that kind of silliness.

Dating really is on the back burner for me right now. Let's find the right oportunity for me first, and then I'll ask her out.

Do you want to know who she is?

Again, once I find the right opportunity, she'll get asked out.

So, what are we waiting for?

Go out and make it a great day folks! I guess I'm waiting for my phone to ring today.
Posted by John Tyler at 11:36 AM No comments: 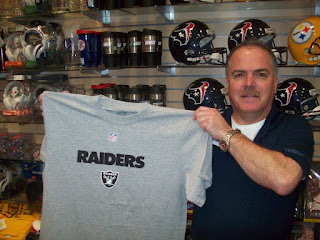 I've finally decided what to wear to watch the Super Bowl with the help of a place called Fanzz in the Clear Lake area.

They couldn't have made it any more easy for me, even posing for a photo with my shirt at the register. I walked in and my shirt was on the top of a stack of offically licenced NFL t-shirts!

Where I go to watch will probably be a game-time decision. I have several places in mind. Send me an email if you have any suggestions!
Posted by John Tyler at 1:52 PM No comments: