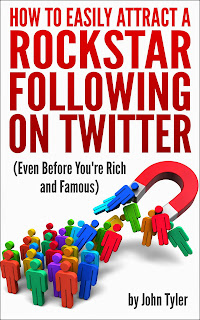 In How to Easily Attract a Rockstar Following on Twitter (Even Before You're Rich and Famous), Tyler gives readers the same simple, duplicatable process he used daily to skyrocket his follower count on the social network from roughly 300 to more than 260,000 followers.

"People have seemed baffled at times, wondering how I was able to build a following that exceeds many public figures or large organizations, without media mentions or a current public platform," said Tyler. "I now give individuals and businesses the same strategy, so they can enjoy the increased exposure and prominence that comes with a large Twitter following."

The eBook is available for immediate download for the Kindle at Amazon.com or from Tyler's blog at PinnacleCreative.net.

You can be pissed at President Obama, but make sure you're pissed for the right reasons

I watched a cable news network criticizing the current president of the United States today for playing golf the day after we learned a worthless scumbag terrorist beheaded an American journalist on video.

Why are you criticizing President Obama on television for something the previous president did as well?

American presidents like to play golf after terrorists execute people, apparently. Golf must help them relax. If you want to bitch about something Obama does, make sure you bitch about others who do the same thing. Should we all stop playing golf because evil people do stupid shit?

There are many reasons to criticize the current president. Golf doesn't make the list.

Watch the video clip starting at 1:50, and find something better than golf to complain about. 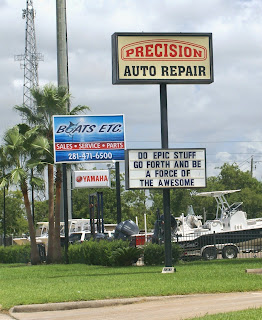 Precision Auto Repair in La Porte, Texas, has a new message for everyone on State Highway 146 (and now the Internet).

Keep doing epic stuff, and go forth and be a force of the awesome.

I graduated from high school in La Porte, Texas, years ago.

There isn’t enough room on the sign to tell you what you need to know, though. When you start doing epic stuff, opposition comes at times from every direction. The demon possessed, the haters and the maggots will attack, but you’ll stand strong as long as you stay true to who you are, and keep doing more epic stuff!

When you do epic stuff, you’ll see amazing things. Strongholds will fall. Your critics and accusers will be silenced. And even in those times that the crap seems to come at you continually, you’ll experience a sense of ease that accompanies life and frees you to just keep being you.

When you’ve done everything you can to stand, you’ve just got to keep on standing. And don’t forget to keep on doing more epic stuff!

Here’s another example of something that happens when we decide to do epic stuff, and go forth and be a force of the awesome: Great memories happen with sexy space-chicks floating in the cosmos, freeing the captives and fighting against the enemies that would drag us down and spoil our day. Epic!

Posted by John Tyler at 2:20 PM No comments:

Photos of a younger John with siblings, new Oilers tailgating gear, and the Numbers mural 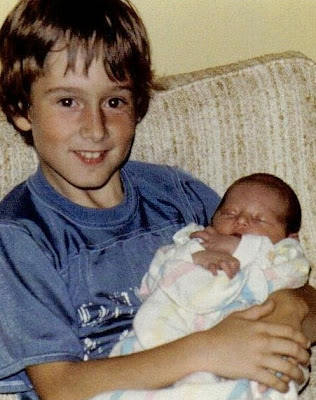 Now she has a baby of her own named Kitty, but back then she was the baby. Here is a photo of me holding my little sister, Erin. My mother took this photo in the late 1970s at our home in a small beach town south of Los Angeles, California. I’m proudly wearing my “Houston Earlers” shirt (honoring Earl Campbell), worn and washed so many times that the letters are peeling off. 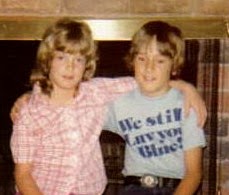 Solidarity. Oilers fans always seem to stick together. My mother took this photograph of my sister Jennifer and me in the early 1980s. During this time, we lived in the Clear Lake City area, south of Houston, Texas. 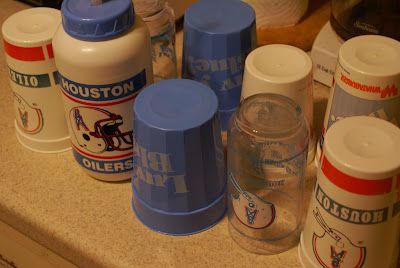 We have plenty of cups for tailgating. My roommate went to a pretty cool garage sale and brought home a myriad of cups honoring the Greatest Football Team. I’ve been checking eBay for parking passes to get into the NRG Stadium parking lot in the near future. That’s a pretty good party on game day, and a fantastic opportunity for fans to get their photo on this blog (if they’re dressed properly). 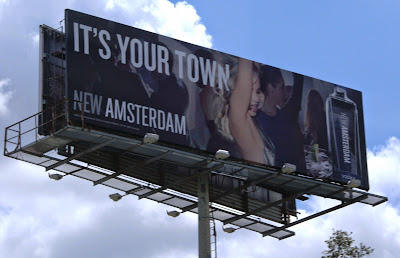 It’s been a big responsibility owning this town. I enjoyed seeing this billboard again south of downtown Houston (the same billboard was on the opposite side of Interstate 45 several months ago). You know how much I enjoy beauties on the dance floor, almost as much as I enjoy life itself. I’ve also been known to enjoy vodka a time or two, but that’s our secret. Well, I guess that’s not a secret anymore. Vodka tonic is my favorite drinky. I'll have to try some of this New Amsterdam sometime. 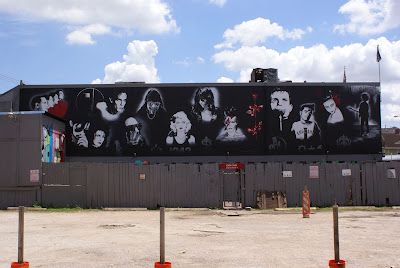 Speaking of that, look at what they’ve done to Numbers! I’m impressed. An artist has painted a mural on an outside wall featuring many of the artists that we grew up listening to there. Morrissey, Al Jourgensen, Trent Reznor, Robert Smith, David Bowie, Sisters of Mercy, Blondie, etc. I haven’t been inside in a while, so I might make an appearance soon.

Posted by John Tyler at 4:55 PM No comments:

Back to Football: Lucy Liu and John Tyler welcome the Houston Oilers back to the NFL 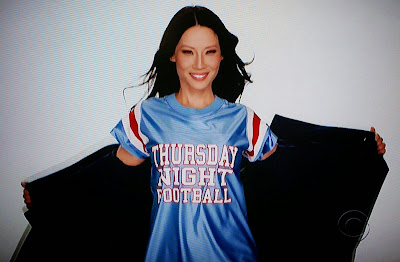 Finally we can kiss this Texans silliness goodbye. Get ready for Columbia Blue, NFL. The way it was supposed to be.

Posted by John Tyler at 7:16 PM No comments: 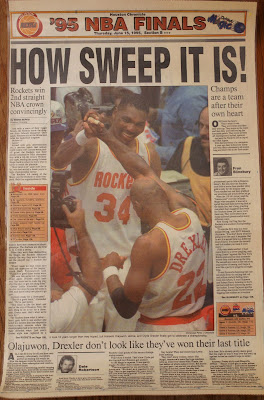 Both pages are laminated and ready for framing, in good condition.

See Hakeem Olajuwon and Clyde Drexler on the floor of The Summit with the Larry O'Brien Championship Trophy, and read the coverage of their sweep against the Orlando Magic.

These are a must for any collector of NBA or Houston Rockets history.

Thank you, and good luck bidding!

Robot love (with a reminder for my future Princess)