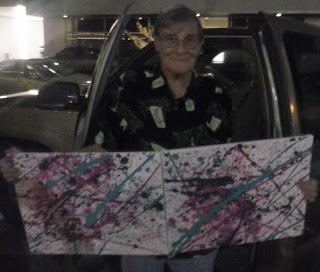 Veronica Erin didn't even ask her ex-boyfriend to roll down his car window before unloading her handgun into his defenseless body in a Houston-area parking lot last week.

Once the gun ran out of bullets, she proceeded to beat the shit out of his dead body with the gun.

Her Facebook page is interesting. One of the songs she posted recently was entitled, "I'm Going to Show You Crazy."

She's a special kind of nuts. But as it turns out, she's also quite an artist.

Veronica Erin is Pete's niece, and he just so happened to have her laptop computer and a couple of her paintings in the back seat of his Chevrolet pickup last night at a Houston restaurant.

The laptop doesn't work, but the paintings are quite lovely. 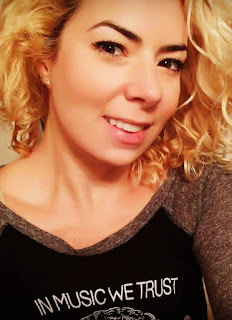 Over some fantastic enchiladas at Pico's on Kirby at Richmond Avenue, Pete shared details of the killing and his recollection of the young woman over the years. I'd seen the news coverage on the television, but I was shocked to hear the backstory of this brutal murder.

Warning to all the men out there: Don't text your ex. In fact, don't contact her at all. She may go ape-shit and screw up your day.

Hopefully she leaves behind some exquisite paintings for you, though.

Our thoughts are with the victim's family today as they seek justice in this matter.

Posted by John Tyler at 8:25 AM No comments:

Facebook is a very a strange place. I'll fit in well

Effective almost immediately, I'm going to begin participating in the silly banter I find each day on Facebook.

If you're a "friend" on Facebook (or even if you're not a "friend" on Facebook), I'm going to start getting more involved in the conversation. I spend sporadic periods of time reading some of this stuff (and other times avoiding this silliness altogether), but now is the time for all of us to come to the aid of our nation.

I may not always be as enlightened, or as high, or as insane as you folks appear, but we'll try to have a good time anyway.

I can't find another place online where this concept is more true than on Facebook. I've kept silent there long enough.

To the ultra-spiritual, get ready for my brand of spirituality. To the wastiods and drunkards, let's talk stupid together. To the disturbed and mentally ill, let's push the envelope of nuttiness and nonsense.

For those wanting to grow their business into empires so massive we can wipe our shiny teeth with cash like rap stars, let's be filthy rich. After all, our daddy owns the cattle on a thousand hills so we have all the money we could ever spend.

See, it's not all negative. Keep in mind, there is quite a bit of good conversation taking place there as well, and I'll occasionally jump in on that also.

I've often avoided Facebook because of the utter silliness I see there, while ignoring the fact that this is an environment I could flourish in. Or be hated in.

Either way, let's rise up like warriors. Don't worry, I'll make sure to enjoy some cervezas (or margaritas in a can) occasionally so I say everything that needs to be said. That's the mark of a real champion. Someone who bites their lip time after time after time, but finally decides to say what is necessary when it's necessary.