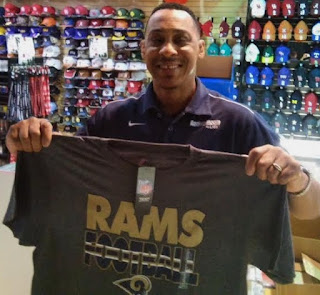 One of the friendliest folks you'll ever meet in a retail establishment just led me to the winning Majestic Triple Peak gear for my Super Bowl 51 Opening Night appearance at Minute Maid Park.

Lids Locker Room at Houston's Memorial City Mall is fully prepared for the game, with officially licensed gear all over the place!

Don't even get me started on the bargains there. The tag read $26 for this incredible cotton-polyester blend masterpiece honoring the World Famous Los Angeles Rams, and he rang me up for less than $19.99! I love that place for the incredible selection, unexpected low prices and helpful staff.

I'll do additional research to see what other Super Bowl related events are on the schedule.

With Super Bowl 51 taking place very close to my current residence, I feel it's time to begin considering what in Houston I should participate in as the game draws near.

I've also began giving thought to a theme I want my celebrations to consist of during those two weeks. 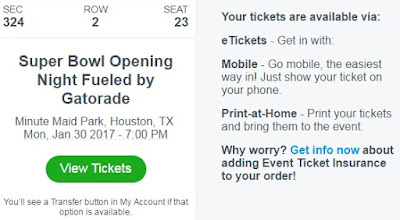 Opening Night tickets went on sale for an event at Minute Maid Park on Jan. 20. The local CBS affiliate KHOU describes the event on its web site:

"Fans are invited to watch media from all over the world interview the Super Bowl players. In addition, the event will feature live musical performances from premiere talent, special appearances and autographs by NFL Legends, cheerleaders and team mascots and a Red Carpet fan photo opportunity."

I purchased my ticket today from Ticketmaster. Sounds like a potentially important event for which I might need to obtain some new officially licensed NFL gear. I've learned you need to always dress properly for these types of events.

In determining my theme, I decided to thank the NFL for a huge decision that came to pass this year. That theme is the return of an NFL franchise to the second largest market in the United States, clearly a huge step for the league and those of us who occasionally like to enjoy a game. 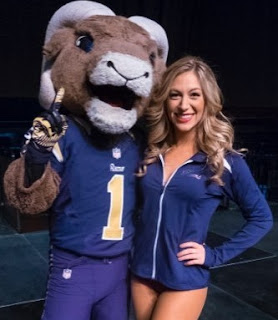 Ladies and gentleman, after way too many years, the Los Angeles Rams are again blessing the city of Los Angeles, California, with contests in the L.A. Coliseum. And don't forget about that big, beautiful new stadium that workers are diligently putting together in Inglewood (always up to so much good), scheduled to open in 2019.

I'll not only tweet information about my activities, but also retweet select content from the Rams organization to highlight what they have going on during those weeks leading up to the game. I simply enjoy honoring reputable organizations online, and look forward to seeing what the Rams' folks have planned in that city during those exciting weeks.

I don't have to call this The Big Game. I'm allowed to use the term "Super Bowl" on this blog because that's what that game is really called.

And Super Bowl 51 takes place down the road this year. I'll see y'all around town. 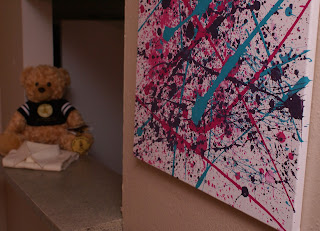 Goldie finds the artwork colorful and a wonderful conversation piece, but somewhat disturbing all the same.

Pete was nice enough to offer Ms. Veronica's paintings for the adornment of my wonderful dwelling place.

I haven't heard what has come of the artist, who I mentioned here initially in a blog post May 27. I imagine she has a lot of explaining to do to a Harris County jury, but I am quite grateful for her contribution to my current home.

The pieces of art were passed on to me after my public compliments of her creativity.

I have tentatively given the name "I'm Going to Show You Crazy" to this piece, but I'm open to the artist's own name for the work if she should want to submit that at some point.

I sense the anger and frustration. I sense the joy and levity. I find the juxtaposition of colors both soothing and disturbing, the long strokes and elegant splatters similarly marks of pent-up frustration and expressions of unbridled freedom.

And I have no idea what any of that means.

These new paintings make me wonder if obtaining even more art for the walls would be a noble pursuit.

However, I do appreciate and enjoy the paintings. Thank you, Pete, and share a "thank you" to everyone else who approved passing these on to me.

Posted by John Tyler at 9:18 PM No comments:

After careful consideration, my endorsement for President of the United States

We should vote for this guy instead.
Posted by John Tyler at 9:31 AM No comments: