Goldie wants to join us at the feature films 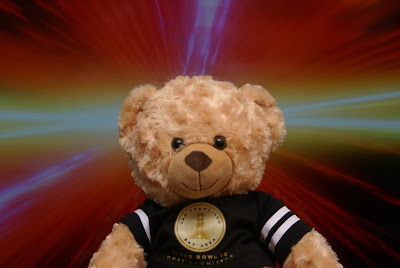 I'd love to take the Goldie pictured here with me, but people might think I'm silly. I don't need anyone else thinking I'm silly.

Alamo Drafthouse screens 2001: A Space Odyssey across its chain of theaters that night. I look forward to attending in Katy, Texas, the same location I was lucky enough to see Stanley Kubrick's A Clockwork Orange on the big screen recently.

I saw 2001 for the first time as a sixth- or seventh-grader in the Houston area, thanks to teacher who obviously understood the importance of the deeper messages in the film. Showing a room full of 11- and 12-year-olds that particular movie is a gutsy and admirable decision by a teacher. Although certainly suitable for an 11-year-old, this is not really a picture that can be fully appreciated (in my opinion) by someone that age.

Show it to the kids anyway. They'll remember and appreciate the gesture when they get older.

Goldie looks lovely in space with lots of colors around her head. Very inspiring. Just like the feature film that has inspired so many other artists over the years.

Most of y'all remember this video, but I'll post it here again for you (from 1992 in Barstow, California).

Goldie would probably enjoying seeing Friday I'm in Love as well, but we're not sure of a release date yet. I'll let you know if I hear anything.

In the meantime, I'm planning to attend this party also.

Posted by John Tyler at 8:05 PM No comments: