Back in Long Beach this week, relaxing at a familiar place

I was thinking back to the last time I traveled west for a check in at this same Long Beach, California location. 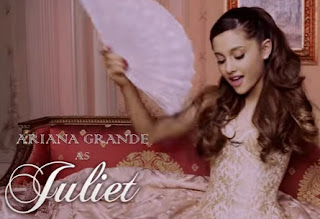 I planned on recording a podcast here at the time, which I would like to do again during this trip. Pop star Ariana Grande premiered a music video for her song Right There while I was right here. Ariana Grande was strangely in the news again as I drove into town.

A loser built a bomb and took out his anger and frustration on some really dangerous infidels: Eight- to 15-year-old girls. Any nut who thinks God is telling him to blow up a bunch of teenage girls spending their baby sitting money on an Ariana Grande show is clearly tuned in to the wrong frequency.

Speaking of children, this place is situated right next door to what sounds like a day care or elementary school that's on recess a lot. The laughter of children at play and the careful direction of adults put in their charge is heard often throughout the day. Children are our future, sang Whitney Houston. It's wonderful to hear them having such a good time all day long.

I was honored to receive a visit from the Long Beach Fire Department yesterday for a surprise inspection. That visit prompted a new nine volt battery in my room's fire alarm. The last two times I've visited the Los Angeles area the local fire department showed up where I was staying for some type of inspection. About seven or eight of them showed up in Inglewood during my last visit there as well. Safety first. 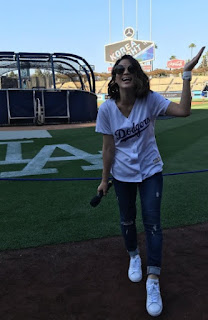 I once again watched the World Famous Los Angeles Dodgers at Dodger Stadium last night. Such a wonderful place. They called the evening Korea Night. There did seem to be a lot of Koreans there, including this very talented woman who sang both the Korean and American national anthems. That silly guy who plays a physician on TV read the Dodgers starting line ups and made sexy faces on the jumbo tron later in the game.

The "kiss-cam" wasn't a bunch of pecks on the lips like I've seen over the years at Minute Maid Park. Many of these kisses last night where full-on make out sessions clearly using tongue and designed to show the level of passionate, unbridled love that seems to flow like a mighty rushing stream at Dodger Stadium.

A good time was had by all, except by those who must have a Dodger victory to be happy in life. The Cardinals made the Dodger loss last night look too easy. I trust the Dodgers will step up their game pretty soon with the world champion Cubs coming in town later this week. Below this post is a photo of some cool guys I saw hanging around the Smilin' Man at the ballpark yesterday. There's always a lot of love and joy at the ballpark, along with a bunch of cool people.

I need to get out and visit some other L.A. spots before heading back, but I'll probably just do some relaxing as well.

Unfortunately, I will likely miss the Memorial Day screening of Kubrick's Full Metal Jacket at the Alamo Drafthouse in Katy, Texas. I had previously planned on attending. We'll have to see how I feel after driving all day Monday. Probably worn-out from the road, wanting a shower and sleepy time. I'll try to schedule things better for the Alamo screening of The Shining later this year, making sure I get to view that one on the big screen.

Keep an eye here on my blog and on my Twitter account for updates. I check out of here this weekend to head back toward Houston. 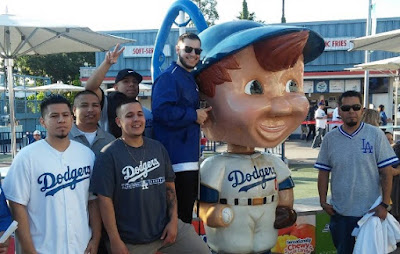 Posted by John Tyler at 7:26 PM No comments: