Rams game in Los Angeles lots of fun, Goldie given to local family 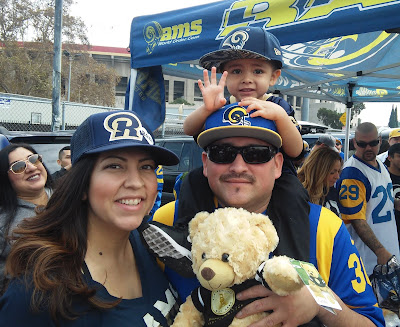 I'm writing the first draft of this post on my telephone in the air between Los Angeles and Houston (in airplane mode, of course) to best utilize this time.

The trip to L.A. to catch a Rams game was a lot of fun. When I purchased the ticket at the start of the season, I anticipated a much more evenly matched game. Since that time, key Texans players Watson, Watt and Mercilus were unavailable due to injury, and Cushing is gone because he worked out too hard (again).

This gave us the game we had Sunday. The Rams did what the Rams do, and I assume the Texans had fans looking forward to next season. Although the first half was slower than many had anticipated, during the second half I found myself jumping from my seat often while clapping ferociously. 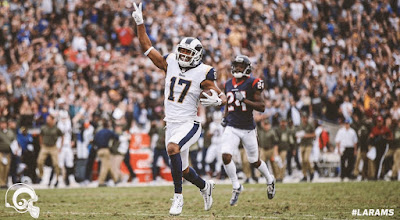 I think the overall experience of attending Rams games will improve greatly once the new stadium is opened. I like the Coliseum, and historic sports venues in general, but it always seemed more like a college stadium than a NFL stadium to me. I hope the NFL doesn't end up regretting the decision to move two franchises, almost simultaneously, to a city that has let teams get away on several occasions. L.A. definitely needs and deserves a NFL team, but will fans there sufficiently support two of them while St. Louis, San Diego and Oakland do without? Solution: Fill the stadium.

I was a little surprised at how many Texans fans were in Los Angeles for the game. They were all over the place, both at the game and tailgating in the parking lots. I don't know if I can ever remember attending a professional football game in which so many of the opposing team's fans were attendance. They were even in my hotel.

I closed out the day with something that I recommend everyone experience at least one time in their life: a ride through Inglewood after dark on a Los Angeles city bus.

I could have taken an Uber or taxi, but why would I want to miss this incomparable glimpse into a cross-section of American life? Not only that, you cover a lot of terrain for only $1.75.

The Hilton hotel was fantastic. They receive a top rating of "10". They not only took good care of me, they also housed Goldie safely as she awaited her move to a new Los Angeles area household. Fans of Goldie can rest assured knowing she went to a good home (her new family pictured at top of post).

Don't tell the Princess this, but when I purchased the Goldie bear in that photo, I purchased a second Goldie for her as well. I will keep the other Goldie stored until we get together.

I'm not sure where the next adverture takes me, but that is certainly something I'd like to start thinking about. 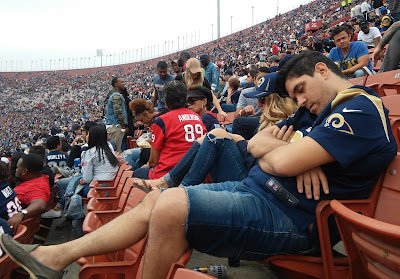 Whose house? Sleepy Man's House. This guy perfectly illustrates how ready we were for the second half of football. He did wake up later, just in time to see the Rams kick the Texans can all over the place.

Posted by John Tyler at 7:58 AM No comments: 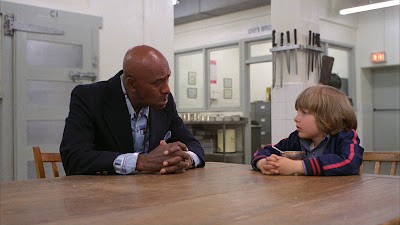 Posted by John Tyler at 9:10 AM No comments: