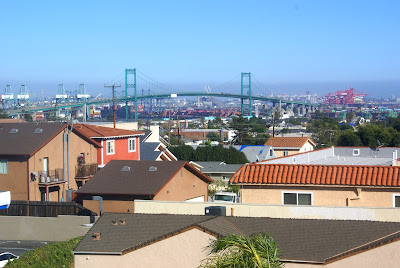 I drove west on I-10 Thursday morning hoping to see Los Angeles again soon and very soon. Using Priceline.com's Express Deals, I was given a hotel in San Pedro with quite a lovely sight out my window. I can literally pull from the hotel parking lot and drive onto that beautiful piece of engineering that spans the Port of Los Angeles within a minute or so. You'll probably remember that bridge from a previous post on this blog. 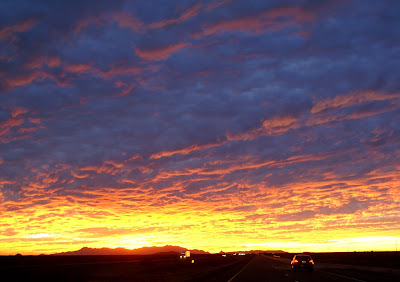 As the sun went down over the mountains somewhere in New Mexico or Arizona, I was reminded of that song from back in the day by The Orb, detailing the incredible beauty of clouds in the the desert sky. The sky actually does change colors out there in the desert in ways I don't often notice elsewhere. This photo was taken after many hours of driving, while fighting off a strange combination of weariness and jitters from way too much caffeine consumed during the day. A nap at a rest stop soon followed. 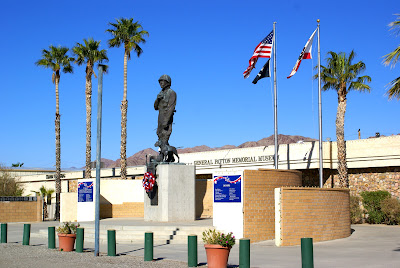 Once in California, General Patton greeted me at the summit. His museum sits at the top of a hill, nestled with a coffee shop, numerous tanks, and several pumps providing travelers with expensive gasoline. I recently saw the movie Patton again and marveled at how a man so famous for pissing off just about everyone every time he opened his mouth became lauded as a military hero. I loved when he shot those two jackasses because they were in his way and then ordered his troops to throw the dead animals off a bridge. True warrior. 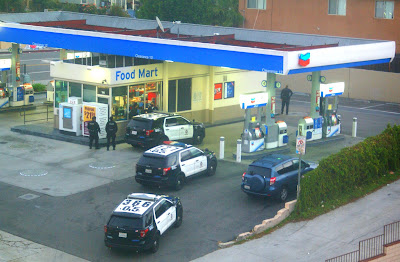 Early morning drama at the gas station. I never actually figured out what was going on yesterday morning at the convenience store across the street, but plenty of San Pedro's finest showed up to sort the issue out. I've seen lots of police officers this past weekend out and about patrolling the neighborhood. 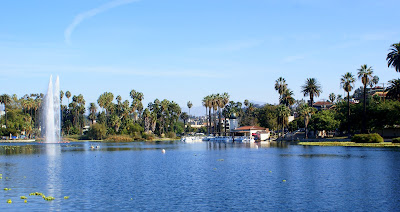 Having recently viewed a Youtube video on the history of Echo Park Lake, I decided to stop by and see the place on the way out to Hollywood Boulevard yesterday morning. This is a somewhat historic body of water in L.A. that has apparently been featured in numerous movies over the years, most notably the 1974 Jack Nicholson film Chinatown. I thought it might be cool to get on board one of those swan pedal boats and take some photos like Jack, but they appeared unavailable for use when I arrived. 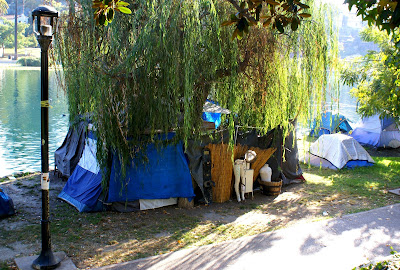 It's difficult to share the experience without mentioning the homeless folks that have created a relatively large waterfront community along one side of the lake. While in one regard this is obviously a sad display of people at a very low point in their lives, there is also something strangely heartening about how some have decided to make this more than just your run-of-the-mill tent camp, using creativity and even a sense of humor in how they've constructed and decorated what we all hope is a temporary stop for them on the way to much better days. 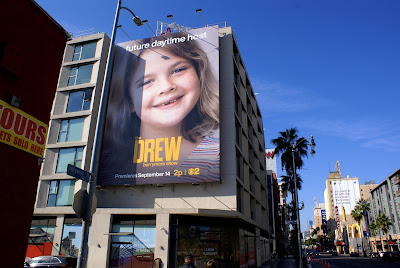 Good morning, Gertie. From Echo Park, I headed off to Hollywood Boulevard, a stop I frequently like to make when in L.A. The street was strangely empty comparatively speaking, with many of the establishments still closed due to COVID-19. No Spider Man, as far as I could tell. No Edward Scissorhands. No Wonder Woman. Just the bearded guy from The Hangover with a baby strapped around his neck, waving at folks wandering past him on the corner. Memorabilia shops were open here and there, but for the most part Hollywood appears to be waiting out the virus like everyone else. 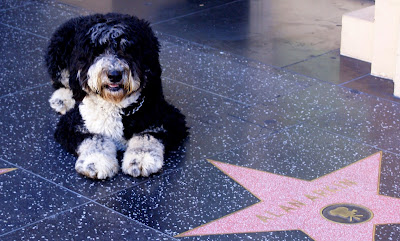 While Hollywood seemed relatively quiet, I did have an opportunity to photograph a celebrity dog. How do I know this dog is a celebrity? The guy who took off his leash and set him on the pavement for photos told us so. The dog looks like a celebrity, so I didn't question the guy. Several people on the street, including myself, stopped for a minute or so to take photos. I hope to see him in some feature films. 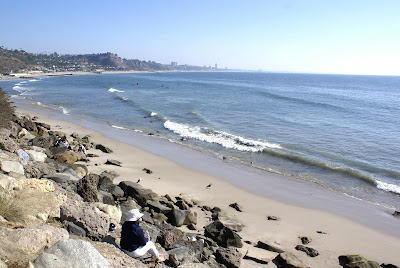 I finished up on Hollywood Boulevard around 11 a.m., much too early to call it a day. I decided to take the advice of the old Steely Dan song and drive west on Sunset to the sea. A very interesting drive that takes you past the Sunset Strip, through exclusive L.A. neighborhoods like Beverly Hills and Bel Air, and then winding in the hills to the sparkling Pacific Ocean. For someone like me who has lived on or near I-10 for most of his life in both Houston and San Antonio, it's great to see where that particular train runs out of track, so to speak.

I'll likely hang out here a couple more days before heading back east on that same stretch of road.