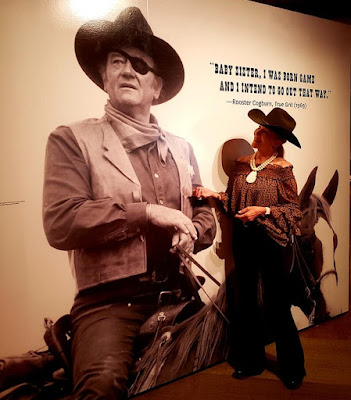 My first visit to the Briscoe Western Art Museum included a presentation and Q&A with Aissa Wayne, daughter of legendary actor John Wayne. You can watch the stream on the museum's Facebook page.

The program was part of an exhibit curently on display at the museum on Hollywood westerns. Aissa not only grew up with a Hollywood legend, often on set and frequently surrounded by her dad's famous friends and associates, she appeared on screen in several of his films. Despite dabbling in acting in her earlier years, she went on to pursue a law career in California and has since retired.

The curator, Andrew Patrick Nelson, asked an interesting question of Aissa during the presentation that actually hit upon something I often think about when I watch John Wayne on film. I'm paraphrasing, but he inquired about how much of the Duke's personality we see in the movies, and how much of what we watch on screen is actually the character he's playing.

John Wayne was so larger-than-life that he's really the only American actor I can think of who seems to always transcend the character he is playing. He was such a huge personality with a unique physical style and voice that no matter who he was portraying on film, or how great the performace was, the man you're watching on the screen is still John Wayne. 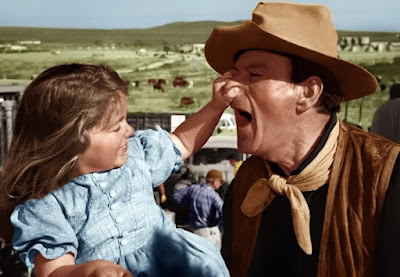 I still remember the day John Wayne died. I don't remember that day because I was a huge fan of his work back then. I was an eight-year-old kid at the time and had probably never sat through an entire John Wayne picture. I remember because of the reaction of my stepfather that evening. We sat together in the living room in Huntington Beach with the television on, when the broadcast was interupted by national network news announcing John Wayne's death. He was visibly upset, and for a moment I thought he was tearing up. I had never, and don't think I have since, seen someone react to the death of a stranger like that.

I've always remembered that evening and realized the immense impact John Wayne had on the people who grew up watching his movies. He was loved. As his daughter shared with us this afternoon, he was always a good guy with a big heart. And that certainly is communicated clearly when you watch him on screen, read something he crafted when putting pen to paper, or just see him spending time with friends and family in photographs.

I think I'm going to stream McLintock! this weekend. That's a John Wayne movie in which his daughter Aissa make a brief appearance.

Thank you to the museum, Aissa Wayne, and curator Andrew Patrick Nelson for hosting "Still in the Saddle" in San Antonio. I'm always looking for fantastic reasons to head down to that river.

Posted by John Tyler at 9:54 PM No comments: